Kahler’s sixth grade class took their annual trip to The Challenger Learning Center of Northwest Indiana. Sixth grade science classes prepare for this field trip by learning about the Challenger Disaster and skills they will need for the trip. Students participated in a mission simulation. In the simulation the class was split in half, one half went to the space craft and the other worked in mission control. The classes’ mission was “Return to the Moon.” Classes participated in a simulated rocket lab as well. The aim was to build a rocket that can make it into “deep space orbit.”

Dec. 5 and 6, Kahler hosted the Choir and Band Holiday Concerts. The choir had many types of songs, show choir, sixth, seventh and eighth grade performed. The audience was also able to participate in a sing along. The band performed a few songs for each grade level enrolled. The last song eighth grade performed was “The Night Before Christmas,” read by principal Mr. Newton and Santa made a visit and passed out candy canes to all. After the band concert Band Boosters hosted a party for all of the band members. At the end of the party was the limbo contest. The prize for winning was throwing a pie in the fearless Mrs. Sena-Lopez’s face.

Parents, teachers, as well as both girls’ and boys’ cross country teams all gathered together at Pheasant Hills Park in Dyer to race each other. The race was from the park, two laps around Pheasant Hills Park Pond, and loop back to the park again. Mrs. Gaines and Mr. Langlois put together this event for the school and community as well as to prepare for cross country.

Kahler Middle School welcomed new students on Sept. 14. Students were able to come down from first period and have breakfast with the school officials and school resource officers. 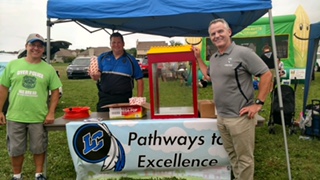 Youtuber Mr. Nicky came to Kahler.  Mr. Nicky takes popular songs and remixes them into songs about social studies.  Mr. Nicky is extremely creative and makes several different songs with each preformance he does at Kahler.  Be sure to check them out in the video included.

5th graders social studies students do a practice round for the annual We The People competition.  Students will eventauly participate in competition in Purdue Northwest as well as Indianapolis.

Recently Kahler celebrated National Principal’s week.  Students had made a very creative card in apprecation for Mr. Newton tieing in his love for the Chicago Cubs.  It is a great card! Check it out!

Assistant Principal Mr. Tim Doyle unveils a new sign over Door “E”.  This sign was constructed by Mr. Doyle over spring break.  A Notre Dame inspired sign that says “TEACH LIKE A CHAMPION TODAY”.  This sign is to bring morale to teachers as they enter the school.  It’s a double-sided sign.  Be sure to check it out if you are around Door “E”

Nurse Lisa Mickelson has decided to leave Kahler Middle School.  She started at Kahler when her daughter, Hannah, had attended Kahler.  Now with both her kids now in college she decided to take a full time job to help support them.  Thank you Nurse Lisa! Good luck at your new job!

The week of April 9th Kahler hosted its annual Schoolastic bookfair.  Students were able to browse and purchase books of their choosing in their designated time slots.

Papyrus is a reed like plant used to make a paper material.  “We are doing a topic on Egypt so we made paper like Egyptians used to” said Abbey Holmes well asked about the project that they are working on in Mrs. Kwiecinski’s social studies class.

The Kahler Band was ISSMA gold winners, the 7th grade with distinction.  The 2018 7th and 8th grade bands have carried on the 23 year tradition of musical excellence, 5th graders have recently started taking thought to joining the band.  On Tuesday March 20th 5th graders sat down and started trying out instruments to see which one they are most comfortable with.  5th grade students wishing to join the band also took a pre test and had a brief interview, about wishing to join, with band director Mrs. Leta Sena-Lopez.

Kahler proudly displays all of their trophies promptly in the front office.  These trophies include multiple of the dance team’s and other clubs such as science olympiad.  Be sure to check out the trophies as well as congratulate the kids for their harwork to earn them!

Kahler student council member wrote positive and encouraging messages on the side walk leading up to the main doors.  The messages were intended to encourage students as they walked in to school on the day of ISTEP testing.

On February 27th, the girls basketball teams played their last regualr season games.  Their tournament starts Mach 1st.   The 8th grade girls were recognized after they faced off against Grimmer Middle School and won.  For their recognition, each player recieved a gift bag with candy, a basktball braclet, a water bottle, a flower and baloons personalized with their number on them.  Good luck to the 7th and 8th grade teams as they head into thier tournaments!

On February 12th the Harlem Wizards paid a visit to KMS. It was a night filled with family fun. Not only did they play a basketball game against Kahler faculty members and the Dyer Police Department,  but there was also meet and greets as well as merchandise available for purchase, and interactive activities for the fans.

Positive Behavior Intervention Support is in effect as this year’s reward program.  Good behavior results in Kolt Cash (see redemption prizes included).  Just announced is the end of the year trip to the zoo.  Save up your Kolt Cash!

The 2017-2018 yearbook theme has been announced.  The theme will coincide with this school year’s theme “Shoot for the Stars.”  Take a look at this year’s cover.  Be sure to purchase one because there are only few left.

All year long Ms. Schuldt and the yearbook club have been working to construct a masterful yearbook.  Make sure to buy a yearbook!

I Double Dog Dare You

Kahler 5th graders receive a lesson about the dangers of drugs by D.A.R.E officer Brian Kissinger.  Joining officer Kissinger was police dog, Kolt.  The 5th graders love when Kolt comes and they can hear about his role on the department.

From Book to Stage

Mrs. Bloom- Johnson’s advanced 8th grade English class participates in a Socratic seminar.  A Socratic seminar is when a group of students sit in the middle of the room and discuss their reading of a book, while the rest of the class looks on.

Kahler’s Office Decked for The Hollidays

Kahler has started a dodge ball tournament.  This takes place during tutoring at 8:00 am.  Each grade has a bracket and will be playing in a tournament.  Stay tuned for more about dodge ball as the season goes on!

NJHS has started their annual collection of food for local families of need for the holiday season.  This is the collection so far.

Kahler students and their veterans enjoy a nice breakfast provided by the cafeteria staff before the veterans day program.

Kahler Middle School honored veterans with an all school assembly.  Kahler’s Veteran’s Day program took place on Friday, November 10th .  The program included a standing ovation for veterans as they entered, performances by the band and choir, as well as multiple speakers.

Mr. King on his New Position

Kahler teachers recently redecorated one of the girls bathrooms.  They got the idea from a post that went viral from a school on the east coast.  They gave the bathroom a coat of fresh paint and decorated the walls with inspirational text and artsy designs to give the Kahler girls some added encouragement.

Shoot For The Stars Theme

Various staff members and students give their thoughts on this year’s theme at Kahler: Shoot For The Stars.

Ms. Kelly Gravley gives us an update on Student Council so far and what to expect this year.

6th graders give their thoughts on running the Pacer Test in gym class.